Last week I went for a stroll along the Charles River in Cambridge with a CEO friend who runs a well-known media business. The topic: innovation.

“A few years ago,” he told me, “my brother was bored. He’d made some money buying a couple small retail brands that had stalled out, trying new ideas, and selling them after they grew. He began wondering what’s another category where a tired monopoly hasn’t innovated in a long time?”

Answer: lip balm. Turns out lip balms were dominated by two players who hadn’t tried anything new in years. So my friend’s brother asked his wife what bothered her if anything about her lip balm.

She said she had trouble finding the little tube in her purse.

A few weeks later they had a new design: an egg. With funky colors.

And so was born EOS, which grew quickly to hundreds of millions in sales and the #2 lip balm brand in the world.

Asking the simplest questions, and thinking differently about their answers, can lead to surprising outcomes. 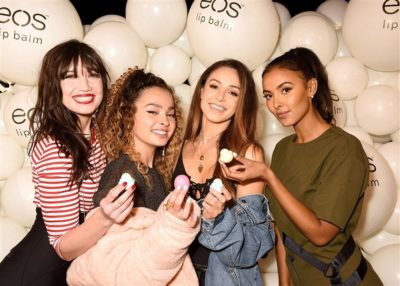 Two weeks ago, I presented to leadership of the 27 institutes of the National Institutes of Health on innovation. I believe it was the first time Teenage Mutant Ninja Turtles was presented at an NIH briefing, along with James Bond and the beautiful baby problem.

Why TMNT? Suppose you were a film studio exec, and I came into your office with a new project:
Giant turtles.
Who carry swords.
And … they love pizza!

You’d probably tell me to get out of your office.

The point: TMNT was a loonshot that begat a franchise. Just like Dr. No, the first James Bond movie. Studio execs said there’s no way audiences would buy a metrosexual British spy that saves the world.

Today, the well being of our people and the resilience of our economy depends on our collective ability to nurture new-science, new-drug, new-business-model loonshots. 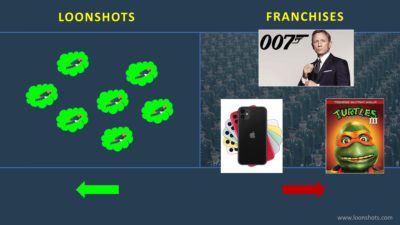 …in Korea. The story of South Korea’s rise is like the first half — the good half — of the Nokia, Pan Am, or Polaroid stories I wrote about. In the early 1960s, Korea’s per-capita GDP was below that of Haiti, Yemen, and Ethiopia. Today it leads the world in technology, healthcare, and education.

Top of mind there: how should Korea escape the second act — the bad half — of those stories and avoid the phase-transition decline?

(The answer, by way of the story of the British empire vs. the Qing dynasty, is in chapter 9: “Why the world speaks English.”)

Ps – check out the wild cover below – U-boat submarines, Edwin Land’s polaroid filters being used in smart phones, Steve Jobs, and … I don’t know what else. 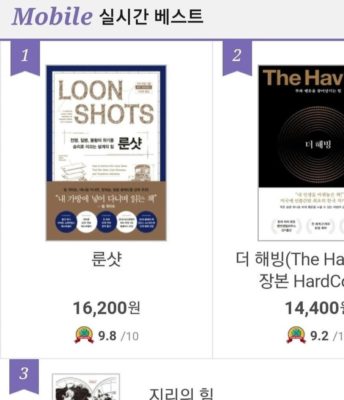 A friend who suffers from stage fright asked me if I get anxious before I go on stage. I get flooded with adrenaline, especially before large audiences, but not quite anxious.

I use a trick my dad taught me. He used to drive me to tennis tournaments when I competed in the juniors. I once asked him about nerves before a game. He told me you want those butterflies: they make you sharp. The trick is to find the sweet spot between too much and not enough.

To do that, create a trigger that helps you channel the adrenaline into heightened focus rather than scattered nerves. A piece of music or a mantra that you train, through repetition and visualization, to associate with calm and power.

One way to get better at creating mental triggers is through meditation.

Self-hypnosis is a more directed version of meditation. I’ve used it for years. See this short clip where I speak to Tim Ferriss about using hypnosis to calm racing thoughts and fall sleep faster. (Full interview with Tim here.) 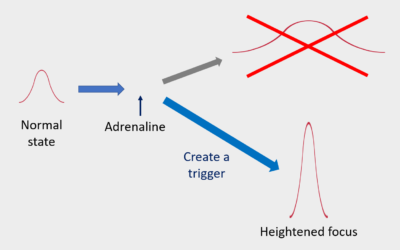 Department of strange and funny