War breeds conspiracy, and in the biopharmaceutical world, far from public view, a broad conspiracy has formed. Tired of waiting for the vacuum of national scientific leadership to be filled and impatient with the glacial pace of federal research labs, nearly all the major players in drug discovery and development have taken matters into their own hands. The goal of their insider-only collaboration—called “Covid R&D”—is to accelerate creation of a vaccine or cure.

[Originally appeared in the Wall Street Journal, May 6, 2020]

Over the past four weeks I have spoken with or participated in closed group calls with the chief scientists, chief operating officers or CEOs of more than three dozen of the world’s largest biopharmaceutical research firms. In these unprecedented discussions, sworn competitors have shared proprietary data from promising drug candidates that they ordinarily would guard like prized jewels. Deals have been made and work begun without the participation of lawyers. Representatives of the Food and Drug Administration have even joined the calls to offer assistance. 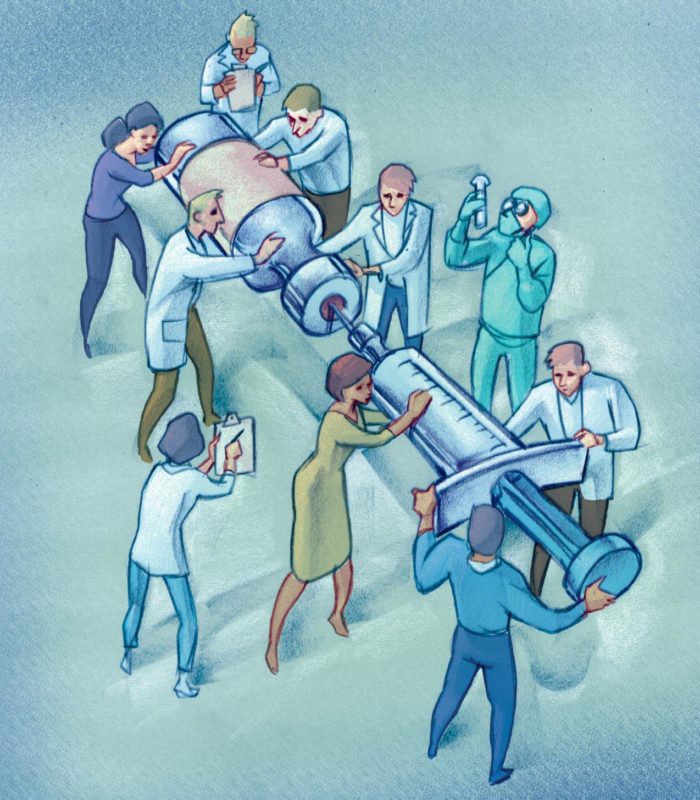 Market turf wars have been set aside to focus on what scientists do best: develop hypotheses, design experiments and get data. The goal of these calls is to do it fast and at scale. The participants are doing it without hope of profit. How can you make money from a product that will likely be irrelevant within a year, and for which you can’t charge prices that could possibly recoup your costs? Once herd immunity has been established, either through disease spread or a vaccine, sales of these drugs will evaporate.

The problem for the industry and the world has been the opposite of profiteering: We are in this mess in large part due to incentive failures. The first SARS coronavirus, which appeared in 2002, is an 80% genetic match with the current one, SARS-CoV-2. This means promising research into SARS coronavirus vaccines and drugs initiated back then could have helped our battle today. Funding dwindled, however, shortly after SARS-CoV-1 was contained.

This is a well-known pattern. Companies trying to develop drugs or vaccines for MERS, Ebola or multi-drug-resistant pathogens have struggled to find funding. Several have gone bankrupt. It has taken a global pandemic and catastrophic economic loss to motivate action.

The Covid R&D consortium has self-organized into five cross-company teams to accelerate research: one each for vaccines, new antibody drugs, new antiviral drugs, clinical repurposing (testing drugs developed for other diseases) and preclinical repurposing (laboratory studies rather than human trials). This is a good first step. But industry should do more.

Public communication is crucial. The absence of a calm, credible voice answering basic questions about the science of the fight against the novel coronavirus has created a void that is rapidly filled by rumors and speculation. Anthony Fauci is quickly rising to national-icon status, but he has a day job and as a federal employee is limited in what he can say about clinical trials sponsored by private companies. If anything, the daily White House briefings have undermined public confidence that an effective vaccine or therapy is within reach.

Expert developers understand that drug discovery is a shots-on-goal game. Cures come from combination therapies that attack a pathogen from all sides, which requires an arsenal of moderately active agents, not one silver bullet. Experts also understand the massive challenges required to scale from one gram of drug product, used in laboratory studies or clinical trials, to the tons needed to treat an entire population. The general public doesn’t appreciate these things. We shouldn’t ask administrators and politicians to address them, for the same reason we shouldn’t ask biologists to explain fiscal policy.

Industry leaders should take matters into their own hands and identify an independent scientist—or a small group of them—to provide daily clinical trial updates to the public. This spokesperson should have operational and clinical-trial experience, not merely bureaucratic or administrative skills, and be capable of patiently and clearly explaining what we know, what we don’t, and when we will have more answers. The need is urgent. When bad science screams and good science stays quiet, we all lose.

The Covid R&D consortium must also understand the need for sacrifice. We don’t need four companies with four versions of the same drug running redundant clinical trials at the nation’s hospitals, yet that’s what we have today. In normal times, that’s how business is done. Companies place their chips, investors vote with their dollars, and the game begins. But these aren’t normal times. Either industry leaders should empower their consortium to decide which companies should sacrifice their redundant programs, or the federal government should step in and do it for them. The first choice is likely to lead to better outcomes.

Research leaders inside companies understandably focus on advancing proprietary, patented drugs. That’s where the money and prestige are. Many consider exploration of generic drugs the purview of academic scientists. But in 1951, two pharmaceutical companies simultaneously discovered that isoniazid, a generic drug without patent protection, could cure tuberculosis as part of a combination therapy regimen. For several thousand years TB was a leading cause of human death, responsible by the early 19th century for a quarter of all deaths in Europe.

From 1987 to 1993, a pharmaceutical company ranked first in Fortune’s annual most-admired-company survey. Since then trust in the nation’s drug developers has plunged. The current crisis has created a rare opportunity for the industry to restore its prestige. With greater speed, transparency and willingness to elevate common goals above company needs, the leaders of the Covid R&D consortium can show the world how to win this war.

Mr. Bahcall is a physicist, a former biotech CEO and author of “Loonshots: How to Nurture the Crazy Ideas That Win Wars, Cure Diseases, and Transform Industries.”