Elon Musk, Jeff Bezos, and the Future of NASA

On July 20, I will celebrate the 50th anniversary of NASA’s moon landing with my mother, an astronomer at Princeton University and the former chief scientist of NASA’s Space Telescope Science Institute. Our family’s ties to NASA run deep. My father, also an astronomer, helped start the Hubble Space Telescope program and protected it over the years from Congressional budget-cutters. He lived long enough to help ensure funding for the final Hubble service mission, STS-125, which has kept the telescope going to this day, twice its original life expectancy, but not long enough to see that mission.

As a tribute to my father, the astronaut John Grunsfeld brought my parents’ weddings rings with him on STS-125. To this day, my mother wears those fused wedding rings—which traveled five million miles in space, orbiting the earth 197 times—on a light gold chain around her neck.

I am, by heritage and personal commitment, a friend of NASA. So it is painful to witness the Agency in decline. NASA is the victim of a rapidly evolving space landscape: private industry, academia, and the military are squeezing it from all sides.

A holy trifecta of capitalist superheroes—Musk, Branson, Bezos—has inspired the public with dreams of space and adventure the way NASA used to, and now rarely does.

New technologies that were unimaginable fifty years ago allowed university scientists with ground-based telescopes to achieve the astronomy spectacle of the decade—the first image of a black hole. NASA was not invited to the party.

Meanwhile, as shadowy nation-state actors rapidly populate the final frontier, generals and geopolitical experts have argued that we should not cede this far, far upper ground. So in February, with the Pentagon’s support, the president signed Space Directive Policy-4, the first step in establishing a sixth branch of the US military: the Space Force.

But NASA’s most dangerous foe is Congress. NASA isn’t helping its case. When projects like the James Webb Telescope—with the resolution to probe life outside our solar system—fall years behind schedule and nearly a billion dollars over budget, oversight committees sharpen their knives. NASA scrambles to justify itself on economic grounds, but those arguments often fall flat. On one of its websites, NASA takes credit for inventing athletic shoes, wireless headsets, and artificial limbs. It’s hard to read those pages without wincing. The absurdity of the claims undermines NASA’s seriousness of purpose.

All of this translates into a franchise in crisis.

The 50th anniversary of NASA’s greatest triumph is a time to reflect. But the Agency should look not to past glories. Instead, it should look to the stories of two other legendary franchises that were once threatened by a rapidly evolving landscape.

One teaches the right question to ask. The other offers an answer.

In 1985, Intel cofounders Andy Grove and Gordon Moore faced a crisis. Intel’s success with memory chips had fueled the company’s explosive growth. But Japanese chipmakers, backed by subsidies from their government, were pricing memory chips far below what any American firm could match. Intel sales were plunging.

One day, Grove turned to Moore and asked, effectively, “If we were to start this job fresh, with no ties and no legacy, what would we do?”

Moore instantly answered: “Get out of memories.” That’s exactly what Intel did.

It wasn’t easy. To most employees, Intel meant memory chips; the strategy of dominating that market was akin to religious dogma. “As I started to discuss the possibility of getting out of the memory chip business with some of my associates,” Grove later wrote, “I had a hard time getting the words out of my mouth.” But it was the right decision. Intel gave up memory chips and doubled down on microprocessors. Today, the company is worth over $200 billion. Grove asked the right question.

Of course, the stakes are different for private companies and public research agencies. NASA doesn’t have the same freedom to suddenly change its mission. But the experience of one unusual company—one that lived in a gray zone between private industry and sheltered public good—offers a relevant answer to that same question when applied to NASA.

In 1907, a brand-name franchise was deep in crisis. Thirty years after Alexander Graham Bell created the Bell Telephone Company, its survival was in serious doubt. Bell’s telephone patent had expired, and hundreds of new phone companies were vying to unseat Ma Bell. The company’s finances were deteriorating. The company’s leaders—a board of Boston Brahmins—had been milking the license from Bell’s patent for two decades and had let the business go.

Later that year, a banking group led by J. P. Morgan (the person) took control of the company—by then renamed AT&T—got rid of its board and management, and installed Theodore Vail, age 62, as its new chief executive.

Shortly after Vail took over, he promised that Americans would soon be able to call anyone, anywhere in the country.

At the time, few inside or outside AT&T believed Vail. Calls over even a fraction of that distance barely worked. Electric signals faded as they traveled down a wire, and no one could explain exactly why. The electron had only been discovered 10 years earlier; quantum mechanics, which held the answer, was 20 years away. Vail’s goal required technologies that did not yet exist, based on science that was not yet known.

Vail persuaded his new board of directors that to solve these problems, the company should create a quarantined group working on “fundamental” research. Over the next several years, this group worked through the science and solved the problem of the fading signals. They invented the vacuum tube: the world’s first amplifier. 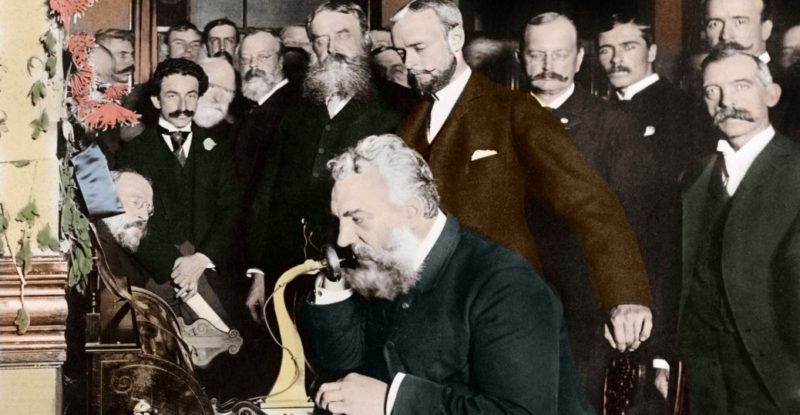 On January 25, 1915, several hundred people gathered in his fifteenth-floor conference room in New York. Alexander Graham Bell, coaxed out of retirement, placed a call to Thomas Watson in San Francisco. It was 39 years after their first wired conversation between two buildings in Boston. Watson picked up.

“It would take me a week to get to you this time,” replied Watson.

Over the next 50 years, Vail’s organization—eventually called the Bell Telephone Laboratories—produced the transistor, the solar cell, the CCD chip (used inside every digital camera), the first continuously operating laser, the Unix operating system, the C programming language, and eight Nobel Prizes.

NASA faces today what Vail faced a century ago: A rapid proliferation of upstarts threatens a government-sanctioned monopoly.

The legacy of Vail, NASA should note, was not in the first phone call from New York to San Francisco, the successful moonshot. The legacy was in the lab he built to nurture wild ideas that had no home anywhere else—ideas that were dismissed and neglected, their champions written off as crazy. For lack of any better word, let’s call them loonshots.

Many of those crazy ideas failed. But the ones that succeeded changed our nation. They helped the US lead the world in science and technology for nearly a century.

Several companies today might aspire to recreate Bell Labs. But those remain aspirations, not realities. Alphabet’s secretive research lab X (formerly known as Google X), develops far-out technologies. But it is primarily an engineering shop. Microsoft Research has assembled impressive theorists in computer science, physics, and economics, but it doesn’t have the engineering chops of X or Bell.

Bell Labs’ secret sauce was in the close collaboration between theory and engineering. (John Bardeen and Phil Andersen, for example—two of the greatest condensed matter theorists of the 20th century, with three Nobel Prizes between them—worked side by side with engineers.) Bell Labs could create that magical mix in part because the phone monopoly deal turned AT&T’s research arm into a kind of public-private hybrid. The government required Bell to give away its non-phone inventions, which is how the transistor, CCD chip, solar cell, laser, Unix, and so on became public domain.

Today’s space pioneers, on the other hand—Musk, Branson, and Bezos—have no such deal and constraints. They are all private. Their only obligation is to their shareholders.

This creates a unique opportunity for NASA, whose only obligation is to the nation.

Its reason to exist should be to develop crazy ideas that have no other home. That pursuit matters more to our long-term national interest than where we go next in space.

If we want to see the 21st-century equivalent of the transistor developed here—rather than in China or India or Russia—NASA needs to rethink its mission. The agency’s goal in exploring the final frontier should be to ensure that the US is the initiator, rather than the victim, of innovative surprise. It should become the Bell Labs for outer space.

Generals should take note of one more lesson from history on why this matters. In 1961, when President Kennedy declared America’s intention to put a man on the moon, he was widely applauded. But 40 years earlier, when Robert Goddard described how we might get there—the science of jet propulsion—he was widely ridiculed.

Goddard’s ideas were neglected in the US, but not in Nazi Germany. German scientists used his ideas to develop the first jet-powered aircraft, which flew over a hundred miles per hour faster than any Allied plane, and the first supersonic missile (the V-2 bomb. The war ended, fortunately for the Allies, before Germany could press its advantage with these weapons. We were lucky then. Do we want to count on luck again?

Kennedy’s declaration was the original moonshot. Goddard’s idea was a classic loonshot.

Moonshots are important. Nurturing loonshots, even more so.