Like many of you, I’m flooded with COVID19 news. I understand how bad this is and will get, but here’s why what I hear every day from friends and colleagues in biotech and pharma gives me hope:

No one in drug discovery has ever seen anything like the mobilization going on today against COVID. The pace and urgency and collaborative spirit are incredible, from the same community of drug-hunters that won the battles against Hepatitis C, HIV, TB, and many more. But with tools so much better than even five years ago.

It’s why I’m optimistic that we will have drugs for COVID-19 faster than most people expect.

For example, as of yesterday, there were 71 treatments and 43 vaccines in development for COVID-19, in well over 200 clinical trials across the U.S., China, and Europe. Going from drug and trial design to first-patient-treated in a new trial, all within 3 months, is astonishing. It’s never happened before. 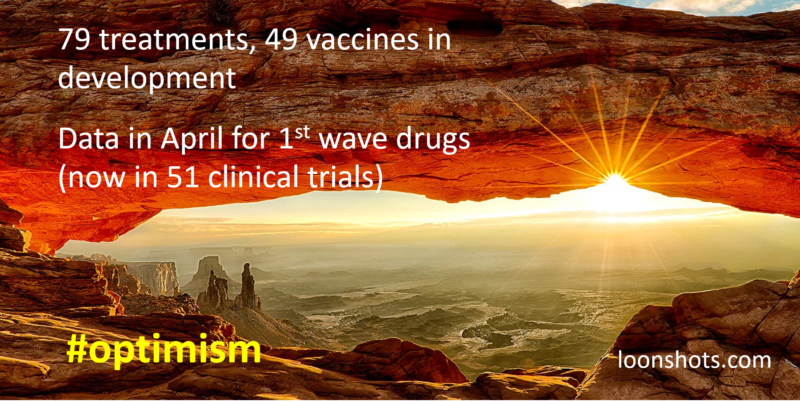 Some of those drugs are new, some are repurposed. The number is growing every day, and they’re coming from everywhere. Vaccines from Moderna, CureVac, BioNTech, Inovio, Janssen, and dozens of others. A biotech that uses injectable, humanized ACE2 protein (the virus’s primary target) as a decoy drug, to mop up the virus. New antibodies. Gilead’s remdesivir, originally designed against Ebola, now repurposed for Covid. The IL-6 immune modulators from Roche, Regeneron and Sanofi, and EUSA.

It’s also another reason why social distancing saves lives: it buys time for the new drugs that are coming. Not just a vaccine, which will prevent the spread and will take more than a year to completely safety + efficacy studies (although a vaccine may be ready as early as the fall for limited roll-out to healthcare workers), but anti-virals and immune modulators. Those therapies won’t slow the spread but with the right dose, schedule, and combination — and some luck — they can massively reduce fatality rates and hospital stays. Data from the first wave of those therapies (remdesivir, the IL-6 inhibitors, and the anti-malarial chloroquine) is expected within weeks.

These are all #loonshots – wild ideas, easily dismissed. But nurturing those ideas is how we as a nation have triumphed in the past.

Ps – On vaccines vs. anti-virals: Vaccines are for prevention; anti-virals are for treating patients who already have the virus. Anti-virals will be much faster to market because: (1) You’re testing in patients looking for a big effect rather than in healthy normals looking for a small effect – so the required trial size is  much smaller. (2) The duration of an anti-viral trial is much shorter (you know in days whether or not the drug works, rather than have to wait for many months). (3) The trial endpoint is much easier to measure: viral load rather than immunity or safety. (4) Many trials are for existing drugs being repurposed, so safety has already been established.