The “Korean miracle” of the last century, in which the nation transformed from a struggling agrarian economy to  industrial powerhouse, from among the poorest of nations to near the top of the list, has been widely admired and studied. Today, Korea’s education system, healthcare, transportation, and industry remain a model for the world. 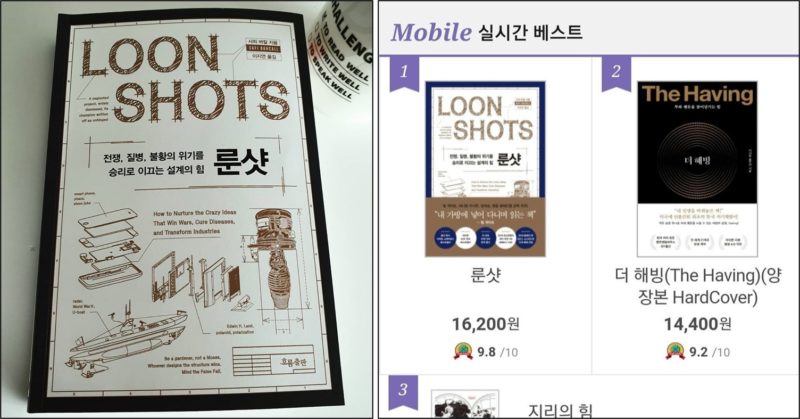 How might Korea and its most prominent companies avoid the fate common to so many promising startups, those that blast to prominence with stories of spectacular growth, only to flame out as their success breeds its own destruction?

Loonshots introduces a surprising new science of group behavior that can help not only companies, but nations answer this riddle.

Before I started and ran a biotechnology company, I was a theoretical physicist. It’s that experience  which led to my work with President Obama’s council of science advisors, the research that grew into this book.

That same experience helped me draw on the science of phase transitions—sudden changes in complex systems—to help answer why teams, companies, and even nations change so dramatically. Even more importantly, the research has identified the small changes in structure rather than culture that can lead to remarkable improvements.

Loonshots may be the first and only book to mix physics, business, and history—and to feature an equation derived from a first-principles theory.

Korea has long emphasized the role of science, technology, and mathematics—its students and researchers rank among the best in the world.

That is why I am especially hopeful that the ideas in Loonshots will resonate in Korea. No other nation in the world may be as well positioned to apply these ideas.

It is my hope they will serve you well.

Update May 2020: The Korean edition hit #1 on various bestseller lists in Korea. My publisher tells me that makes Loonshots officially an “international” bestseller. Also: check out the wild cover. U-boat submarines; Edwin Land’s Polaroid filter in smartphones; Steve Jobs; and … I don’t what else.