Over the past couple decades, scientists have been applying the tools and techniques of a new kind of science, called the science of emergence, to help us understand how birds flock, fish swim, brains work, people vote, criminals behave, ideas spread, diseases erupt, and ecosystems collapse.

Even more recently, those ideas have helped us understand group dynamics. A research team at Cornell identified emergent behaviors among “Humans in Mosh and Circle Pits at Heavy Metal Concerts”. A researcher in France used similar techniques to explain “The Hipster Effect”: why anti-conformists all look the same.

Applying similar principles to the behavior of groups can help us design more innovative teams and companies. The ideas help us identify the small changes in structure rather than culture that can transform the behavior of a group (for more on this see “Why Structure Eats Culture for Lunch”).

It sounds crazy, though. Aren’t all teams different? All people different? Why can we generalize?

Here’s why it works: certain macro behaviors we wish to influence don’t depend on the micro details. The behaviors of the whole depend only on certain rules of interaction between the parts. Usually those rules boil down to a competition between two forces.

Traffic flow is a good example. Drivers would like to travel at some cruising speed. But they also want to avoid crashing, so they like to keep some distance from the car in front of them. Those sound like simple rules, but those two rules can help us understand many of the important collective properties of traffic flow: when traffic will flow smoothly and when it will jam. Traffic engineers use these principles to design better highways—more smooth flow and less jammed flow.

Shouldn’t we expect the behavior of individuals to be much more complex than cars on a highway—too complex to model with simple rules?

Sherlock Holmes may have captured it best in The Sign of the Four: “While the individual man is an insoluble puzzle, in the aggregate he becomes a mathematical certainty.”

Here’s how it works: For all these applications—from highways to hipsters—the key is to start with a model of that system that is “simple but not simplistic.” What does that mean? We want a model of our system that captures enough of the rules behind the interactions we wish to study, but not so much that it because impossible to extract useful lessons.

A key feature we wish to understand in any complex system is the sudden change between two types of emergent behaviors. That sudden snap is known as a phase transition.

Systems snap when the tide turns in a microscopic tug-of-war. Binding energy ties to lock water molecules into rigid formation. Entropy encourages those molecules to roam. As temperature decreases, binding forces get relatively stronger and entropy forces get relatively weaker. When the strengths of those two forces cross, the system snaps. Water freezes.

All phase transitions are the result of two competing forces, like the tug-of-war between binding energy and entropy in water. And that’s how we can begin to apply these ideas to teams and companies: when people organize into any kind of group with a mission, and a reward system tied to that mission, they also create two competing forces—two forms of incentives.

We can think of the two competing incentives, loosely, as stake in outcome and perks of rank.

As structure changes, one grows stronger and the other grows weaker. When groups are small, for example, everyone’s stake in the outcome of the group project is high. At a small biotech, if the drug works everyone will be a hero and a millionaire. If it fails, everyone will be looking for a job.

The perks of rank—job titles or the increase in salary from being promoted—are small compared to those high stakes.

As teams and companies grow larger, the stakes in outcome decrease while the perks of rank increase. When the two cross, the system snaps. Incentives shift from encouraging a focus on projects and outcomes to encouraging a focus on politics and promotion. A simple—but not simplistic—model of incentives inside organizations allows us to calculate when this transition will occur.

That’s the equivalent of the freezing point, 32 Fahrenheit (zero Celsius), for teams and companies. That’s when they change from embracing wild new ideas to rigidly rejecting them.

What Does This Mean For Innovation?

The most important breakthroughs—the ones that change the course of science, business, or history—are fragile. They’re rarely announced with blaring trumpets and a red carpet, dazzling everyone with their brilliance. Instead, they often arrive covered in warts—the failures and seemingly obvious reasons they could never work that make them so easy to dismiss. They pass through long dark tunnels of skepticism and uncertainty, their champions dismissed as crazy. That’s why I call them loonshots.

In the first phase of team organization mentioned above, when stake in outcome dominates, incentives favor uniting around these early stage-projects. Individuals have so much collectively at stake in the outcome of their mission, that they will come together to rescue those projects from their inevitable stumbles and wrong directions. We can call this the loonshot phase.

In the second phase, when perks of rank dominates, incentives favor a focus on careers and promotion. Early-stage projects covered in warts are rejected in favor of ideas that raise the fewest objections. Those are typically franchise projects: the next generation of an already-established product or program (the next statin drug, the next Avengers movie). We can call this the franchise phase.

The sudden change between these two emergent behaviors is a phase transition.

The bad news about these changes in organizations is that phase transitions are inevitable. All liquids freeze. The good news is that understanding the forces that cause a transition allows us to manage it. Water freezes at 32 Fahrenheit. On snowy days, we toss salt on our sidewalks to lower that freezing temperature. We want the snow to melt rather than harden into ice.

We use the same principle to engineer better materials. Adding a small amount of carbon to iron creates a much stronger material: steel. Adding nickel and tungsten to steel creates some of the strongest alloys we know: the steels used inside jet engines and nuclear reactors.

Understanding the analogous control parameters that govern the transition inside teams and companies helps us engineer more innovative organizations.

For more on these ideas, see Loonshots.

How to Nurture the Crazy Ideas That Win Wars, Cure Diseases, and Transform Industries 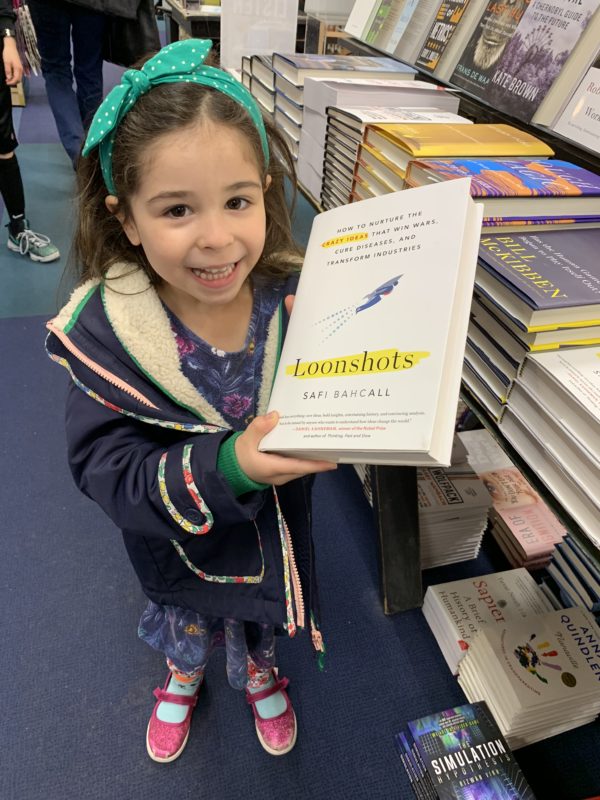 Loonshots, an instant WSJ bestseller, has been translated into 18 languages and selected as an Amazon, Bloomberg, Financial Times, Forbes, Inc., Medium, Newsweek, Strategy + Business, Tech Crunch, and Washington Post Best Business Book of the year. It was the #1 Most Recommended Book of the Year in Bloomberg’s annual survey of CEOs and entrepreneurs.

Loonshots reveals a surprising new way of thinking about the mysteries of group behavior that challenges everything we thought we knew about nurturing radical breakthroughs.

Using examples that range from the spread of fires in forests to the hunt for terrorists online, and stories of thieves and geniuses and kings, Bahcall shows how a new kind of science can help us become the initiators, rather than the victims, of innovative surprise.

Along the way, readers will learn what James Bond and Lipitor have in common, what the movie Imitation Game got wrong about WWII, and what really killed Pan Am, Polaroid, and the Qing Dynasty.